A transferable credit is used when the beneficiary is acting in the capacity of middleman or agent between the applicant, as the ultimate purchaser of goods or services, and the supplier, as the owner or provider of such goods or services. There can be many reasons why such an arrangement is chosen, including where a buyer or seller may utilise the services of an agent as an intermediary to purchase or sell goods or services on their behalf.

A transferable documentary credit allows for all or part of its amount to be transferred, at the request of the named beneficiary (who will be an agent or middleman), to one or more suppliers of goods, or providers of services or performance, and for that supplier or provider to obtain payment through a transferred documentary credit issued in its favour. 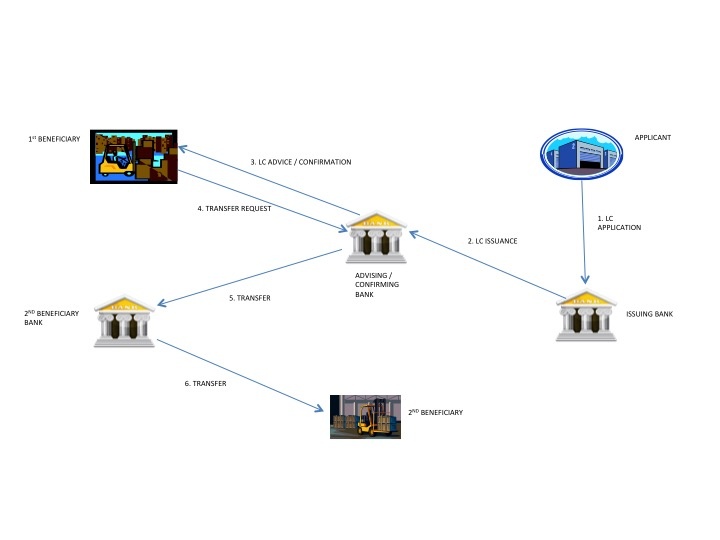 The concept of a transfer under a credit was outlined in the first UCP, publication 82, in article 49: "A credit can only be transferred on the express authority of the principal. In this case the credit can be transferred once only, and on the terms and conditions specified in the original credit, with the exception of the amount of the credit and of the time of validity, which both may be reduced.

If a Commercial Documentary Credit is transferred by fractions, such fractional transfers shall be considered as constituting one single transfer only.

UCP 151, article 49, made a transfer possible, subject to a credit having been issued as ‘transferable' or ‘assignable'. This publication placed transfer and assignment within a single article, and also made mention of the fact that a bank was not bound to effect a transfer except to the extent and in the manner expressly consented to.

UCP 222, article 46, stated that terms such as ‘divisible', ‘fractionable', ‘assignable' and transmissible' added nothing to the meaning of transferable and should not be used.

UCP 500 was the first publication that created extensive rules for transfer (article 48).

A transferable documentary credit, as defined in UCP 600 article 38, is a credit that specifically states it is transferable, thereby allowing for it to be made available in whole or in part to one or more other beneficiaries (each to be known as a second beneficiary), at the request of the beneficiary (who will become known as the first beneficiary).

A transferable documentary credit may only be transferred by a bank that is nominated to honour or negotiate or, if it is available with any bank, by a bank that is specifically authorised in that credit to effect a transfer. If a bank agrees to transfer it will become known as the transferring bank. An issuing bank may also transfer a transferable documentary credit.

A transferable documentary credit can be used in any industry and for any type of goods, service or performance that is being delivered or provided. It is designed for use where the beneficiary of the transferable documentary credit is not the actual supplier, manufacturer or producer of all or part of the goods, or is not the provider of all or part of the required services or performance.

When a nominated bank, or a bank that is specifically authorised to transfer, consent to a request for transfer, a second beneficiary will receive a documentary credit (transferred credit) substantially in the form of the transferable documentary credit that was issued in favour of the first beneficiary. A first beneficiary may request that certain terms and conditions be reduced or curtailed (as currently defined in sub-article 38 (g)).

Why could there be a requirement for a transferable credit?

For the majority of documentary credits that are issued today, the named beneficiary will be the supplier, manufacturer or producer of the required goods, or the company that will provide the required service or performance. In this context, it is the beneficiary who will enter into a sale or other contract with the applicant; will arrange for the shipment or dispatch of the required goods; will present documents for honour or negotiation; and, be the party that is paid in full, less any applicable bank charges.

However, there will be occasions when an applicant or a supplier, manufacturer or producer of the required goods, or a provider of the required service or performance, will contract for the purchase or sale of those goods, or for the provision or rendering of the service or performance, through the intermediary of an agent (or middleman). The chosen agent may be a sole proprietor or a company, either of which specialise in offering procurement or sales services to companies at a country, regional or global level.

The reason for using the services of an agent will vary from transaction to transaction and party to party, and in most cases it will not be for a bank to specifically question why such an arrangement has been put in place or is required.

Transferring a standby letter of credit - UCP vs. ISP

It should be clear to any letter of credit professional that the UCP is not structured to deal with the intricacies and issues that arise out of the issuance of a standby letter of credit. In this respect, article 1, in declaring the scope and application of the UCP, merely states "(including, to the extent to which they may be applicable, any standby letter of credit)". A number of disputes that have arisen under standby letters of credit subject to UCP can be directly attributed to different interpretations by the parties as to which articles will or will not apply.

It can be that certain transactions are more appropriate for issuance under one set of rules than the other. However, when issuing a transferable standby letter of credit, there needs to be an understanding of the potential areas of concern within the rules and where better protection may lie.

Back to recent articles